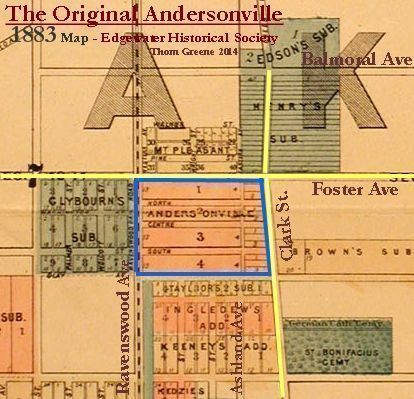 When most Chicagoans think of the section of Edgewater called Andersonville, they picture the stretch of independent and locally owned specialty shops, restaurants, and service providers located along N Clark St. It’s no surprise why. This area, known as the Andersonville Commercial Historic District, is renowned for its nightlife and unique offerings; many of the buildings have remained intact since the early twentieth century, adding to the street’s special vibe. Fewer Chicagoans are familiar with the Andersonville that extends beyond the Commercial Historical District. Even the area’s residents may be unaware, or at least have differing opinions, of the streets that comprise the borders of Andersonville.

In concurrence with the Commercial Historic District boundary, the Andersonville Chamber of Commerce considers Ainslie to be the southern border of the neighborhood. This means that Andersonville actually extends outside of Edgewater a few blocks south of Foster on Clark into the Uptown neighborhood. Some maps draw the boundary of Andersonville one block south at Lawrence Ave. and label the area between Foster and Lawrence as Andersonville Terrace, but this is an antiquated term unused by current residents and is just recently enjoying a revitalization from realtors attempting to capitalize on the popularity of Andersonville.

Many area residents assume Broadway is the eastern border of Andersonville. Like Clark, it is the other main north/south commercial street that runs through Edgewater and, also like Clark, it offers numerous unique dining and shopping options. Yet historically Broadway was never part of the original Andersonville community and has a decidedly different vibe than the Commercial Historic District of Clark. The Andersonville Chamber of Commerce draws the east boundary of Andersonville one street west of Broadway, at the primarily residential Magnolia Avenue.

Surprisingly, an old map was uncovered by Edgewater’s own Thom Greene of Greene & Proppe Design, Inc. The map, circa 1883, will blow all conventional ideas of where Andersonville boundaries were back then. According to the document, Andersonville was located from Clark to Ravenswood and Foster to what appears to be Ainslie. This map shows that the original Andersonville did not include any land North of Foster, but that Andersonville must have grown into its present day boundaries after business’s along clark street in the 1960’s resurrected the Andersonville name to market the commercial area.

Once a tiny village inhabited by mostly Swedish immigrants, Andersonville has retained its small-town friendliness and charm while offering modern Chicago sophistication, making it one of the most desirable neighborhoods in the city. Andersonville’s unique character is defined more by the residents and businesses that proudly call the neighborhood home, rather than by specific street boundaries; and because of this, the discussion over Andersonville’s exact physical borders will surely continue.